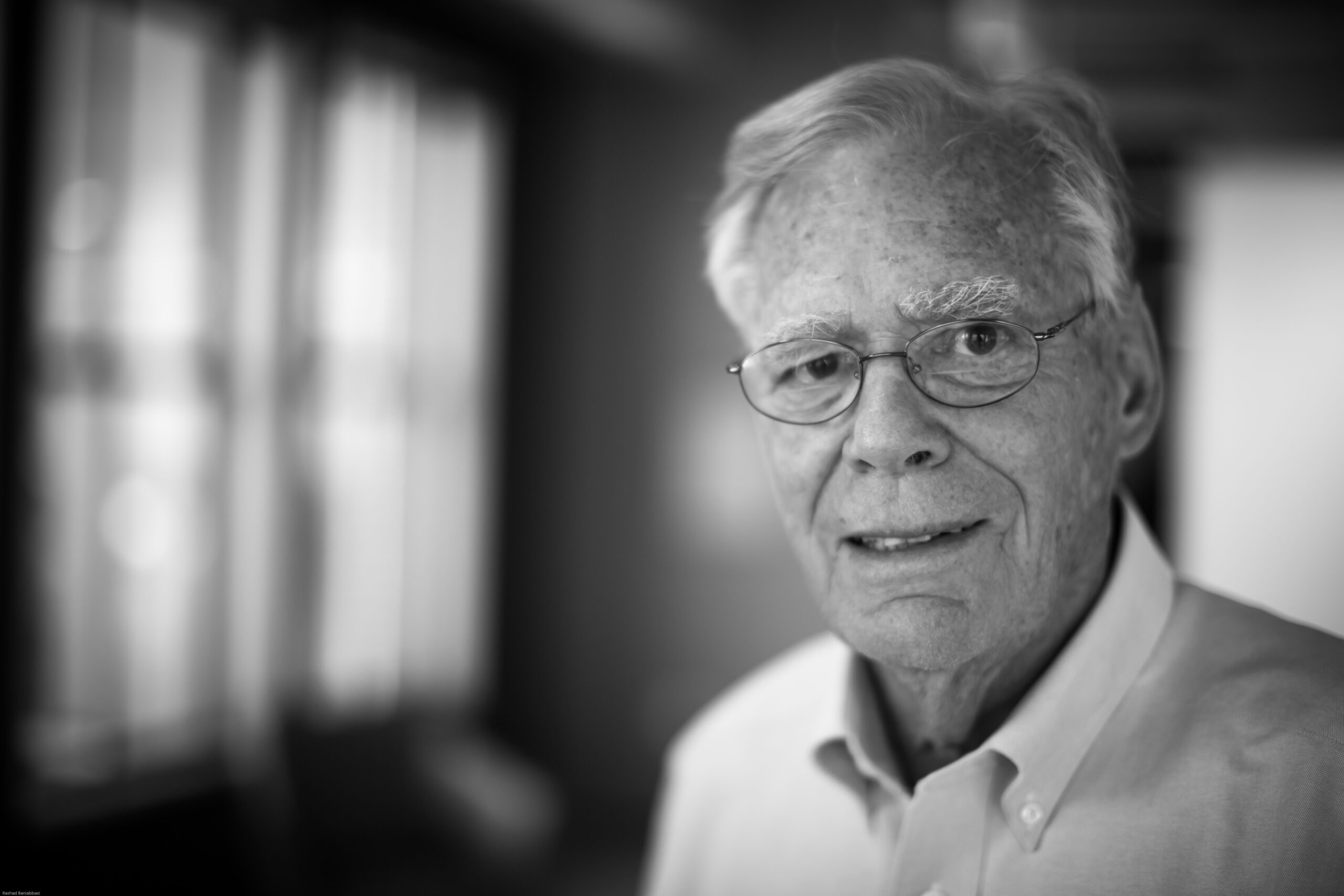 On November 12, 2022, the profession lost a gifted architect and leader when Tom Payette passed away at the age of 90. I was incredibly lucky to have worked with him for the last 15 years of his long and accomplished career before he retired from practice in 2016. The following tribute is from a short speech I gave in Tom’s honor at a celebration of his 50-plus-year career, held at the Harvard Club of Boston on June 23, 2014.

There’s an aspect of Tom’s career that goes beyond architecture and design, and that’s the importance he places on people. I think we all know Tom’s mantra: “Architecture is for people, not for the gratification of the architect.” How many times have we heard that one? But it’s so clear from looking at Tom’s work that he really means it. His architecture has an amazing humanistic quality, manifest by an intimate connection to landscape, ample daylight and views to the outside, spatial and planimetric clarity, and a robust yet warm sense of materiality. These buildings are friendly and welcoming, and though they exhibit humbleness and simplicity, they are also grand and monumental when they need to be. This is especially apparent at the Aga Khan University campus in Karachi. It is a tricky thing to balance the institutional and the human scales. Tom’s architecture makes it look easy.

Tom’s focus on people, both in his design philosophy and also the importance he places in connecting with people, both talking and debating vigorously about design but also showing a genuine interest in the person; this focus on people underscores what I believe is the heart of Tom’s career as an architect, and that is his generosity: his generosity in providing opportunities to young professionals, like me; his generosity in sharing the credit and taking pleasure in the successes of others; and his generosity in building a successful practice and then being willing to take a step back so that the firm can grow and take on a life of its own.

I started working with Tom in 1998, fresh out of school and not very long after he handed over the presidency to Jim Collins. A few weeks after joining the firm, I was working with Tom on my first project for New York Medical College. We were just about finished with a scope and budget definition phase, and Tom took me down to sit in on a meeting with the president, senior administrators, and some of the trustees. Tom started the meeting, and after about five minutes and without any warning, he said, “and now I’m going to turn it over to Mark, who will walk you through the details.” I told Tom later that I was grateful he didn’t warn me because it didn’t give me any time to get nervous – I just stood up and presented. But as much as I appreciated the gesture at the time, I didn’t realize the full significance of what Tom had done for me until years later: he gave me that opportunity as an untested 29-year-old to earn his – and perhaps more importantly, the client’s – confidence and trust.

About a year later, the New York Medical project was winding down, and I was starting to think about what I would be doing next. Tom had just presented to the studio a new master plan for the Aga Khan University, which he had developed during the summer of 1999. That master plan called for a series of additions to the hospital, starting with an expansion to surgery and the first phase of a new ambulatory care complex. So I went into Tom’s office and said I was interested in working with him on those projects. In his characteristically direct and enthusiastic manner, he said, “That’s great! Let’s do it!” Two months later, Tom took me to Karachi for the first time to meet with folks at AKU. Little did I know at the time, the experience would set a long trajectory of working with AKU on numerous projects in Pakistan and, more recently, in East Africa.

About five years after that first trip, Tom started taking me to meetings with the Board of Trustees and His Highness the Aga Khan. In December 2006, we were in Karachi to present the revised master plan for the new Faculty of Arts and Sciences campus. My colleague Dan Gorini and I imposed on Tom to let us co-present the master plan to the Aga Khan and the Board. Tom graciously agreed – yet another example of his generosity of spirit – and from that point forward, Dan and I shared the stage, so to speak, with Tom and began to travel independently to work with the client. I think a lesser architect, a lesser man, would never have agreed to such a thing out of some sense of petty jealousy or a fragile ego or whatever. But as I think we all know, that’s simply not Tom.

So to my mentor, my colleague, and my friend, Tom, thank you for your extraordinary generosity and for the wealth of opportunities you have given to me and my colleagues over the years. We, too, are part of your 50 years of architecture.

Next
Notes from the Field, Part 3: side trip to Nairobi
Cancel Reply